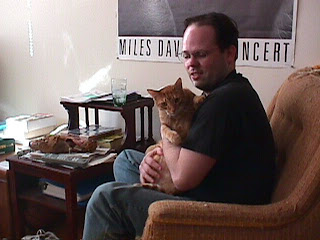 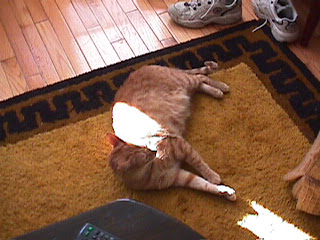 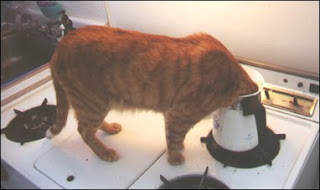 Currently on vacation, reading Laird Hunt's novel The Exquisite. I note this line, from midway through the book:

"When one is in the early, enthusiastic throes of a friendship, one lets a great deal slide."

Which under certain circumstances seems to imply this line from the Mountain Goats song "Game Shows Touch Our Lives":

"People say friends don't destroy one another/What do they know about friends?"

Which is apropos of nothing, really, except to give me an excuse to post this brief entry so people know I've not disappeared. Sometimes you forget that online friends know you only through the Internet, and if you disappear without notice, they worry. I know I have at times wondered to the point of worry about a blogger's extended absence. It's nice that people worry, but it's also nice to let them know you're ok. The above quotes may seem to be in a different spirit than my own lines, but, while I recognize some truth in them, I post them now only because I like them.

I've been getting a lot more sleep lately, and I hope to be able to post somewhat more regularly in the next couple of weeks or so. Thanks for reading, and for those that care, thanks for caring.
Posted by Richard at 5:44 PM 6 comments:

This is Alfie Kohn, from his book The Schools Our Children Deserve:

...all of us tend to be happiest and most effective when we have some say about what we are doing. If we are instead just told what to do [...], achievement tends to drop—right along with any excitement about what we're doing.

The more obvious this idea seems, the more remarkable it is that people are systematically denied the chance to make decisions about what affects them in real schools, real families, and real workplaces. Perhaps no other principle in our society is at once so commonly endorsed and so rarely applied as the value of democratic participation. [...] As one survey after another has confirmed, students are rarely invited to become active participants in their own education, whether they are in kindergarten or college. Indeed, the story of American schools is—and always has been—the story of doing things to students rather than working with them.

The opposite of being controlled is to be able to make decisions, to have one's voice heard. This goes well beyond conventional opportunities to choose, in which each individual selects one option from a menu: which book (from a prepared list) to write a report on, which (elective) course to take in high school or college, which activity to pursue during a narrow block of free time. [...]

...this kind of choosing is limited, to begin with, by the quality of their options. [...] And even when the options are more valuable, authentic decision-making consists of being able to generate the possibilities rather than just choosing among those provided by someone else. Nor does choice always have to be an individual matter: the benefits are multiplied if students can come together to decide. They learn to listen, to consider others' points of view, to argue carefully, to anticipate problems and work things out.

Bringing kids in on the process of designing their own education is particularly terrifying to the staunch defenders of traditional education, whose tightly regulated classroom procedures represent the polar opposite of something messy, something unpredictable—something, well, democratic.

Fed a steady diet of propaganda about traditional* schooling, parents may be resistant to the idea that children should be involved in decision-making. But the attraction remains—can you imagine what a difference it might have made in your life if you were involved in this way? Don't we yearn, still, to have some control over our lives?

This distinction between mere "choice" and "democratic participation" is significant. The implications are broad, because once children are allowed to participate in making decisions affecting their own education, they will not willingly give up the right to remain involved in decision-making. Educate enough children according to such principles, and you have a potential problem. For where else in society are people encouraged to think for themselves or to actually participate in important decisions? (What are important decisions? Food production? Housing? Energy? Growth, as such?) Nowhere. In this way, education is necessarily political. Education reform is political, and all sorts of people want a say in how reform is conceived and implemented. Most of the political battles we hear so much about are further reactionary retrenchments of an already conservative model. So building a new school, a progressive school that runs according to truly democratic principles, is a profoundly political act.

In fact, it is not remarkable at all "that people are systematically denied the chance to make decisions about what affects them in real schools, real families, and real workplaces". Given the material Kohn covers, that line strikes me as a bit disingenuous, since he must know full well that allowing people to make such decisions would entail a thoroughgoing transformation of the political and economic order. His book is a valuable contribution to the endless debates about education (drawing philosophically from Dewey and Whitehead, as well as from numerous studies demonstrating the pernicious effects of traditional education on students, including those students who "succeed", but especially those who do not) (he writes well about parenting too; cf. Unconditional Parenting), but he, perhaps unavoidably, sidesteps these sorts of broader political implications that leap out at me. Of course, the truth that we're happiest when we have some say in what we're doing can easily be twisted to fit into the sort of individual-rights framework we're so familiar with. Which is why Kohn's focus on cooperative learning and cooperative decision-making is so crucial (and equally anathema for political and corporate proponents of traditional models). If I am empowered to make limited decisions affecting my life, that's one thing. I may be better equipped to navigate the broader world, making effective important personal decisions as the need arises. But if groups of children learn to construct knowledge cooperatively, and if they necessarily must consider the voices of all before decisions are made affecting all, then it seems to me that they will be considerably more likely to value democratic participation—and inevitably notice the many incredibly important decisions that have long been out of the control of all but the smallest numbers of people. They might make collective demands and take back the right to make those decisions as well, transforming the nature of the available options in the process. It strikes me that the implications are nothing less than revolutionary.

* I am using the words "traditional" and "progressive" since they are the terms used by Kohn and other education writers, even though many of the so-called "traditional" modes are very recent indeed, and I've elsewhere made clear my unhappiness with the word "progressive".
Posted by Richard at 2:30 PM 5 comments: