Scattered thoughts on children and learning; or: "children are born to philosophize"

Children and how they learn is a subject much on my mind of late. Play being of the utmost importance. (Piaget looms in the background, inevitably.)

We've received a book by Vivian Gussin Paley called A Child's Work: The Importance of Fantasy Play. I've only just begun it, but it's got me thinking. The ways in which children use fantasy in order to explore certain issues, in order to become who they are, reminds me of what Chris Knight and his colleagues have said and written about the human revolution. Very loosely, how in a sense the ability to make believe is what makes us human. Language being the ability to use symbols that are not in fact what they refer to. The ability to hold ideas in our minds, which are in a sense, fantasies.

It is in this context, among others, that I've often felt, though I remain an atheist, that the so-called rational drive to ridicule or eradicate religious belief is remarkably misguided.

Which reminds me of something Sarah Blaffer Hrdy wrote towards the end of her book Mothers and Others: The Evolutionary Origins of Mutual Understanding, about epigenetics, in which she wondered, speculated, at the possibility that those of our genes that have evolved enabling us to understand each other, and cooperate, both being necessary components of our becoming human, might at some point stop being "expressed", given the drastically changed and changing environment in which they have to operate on us, or to emerge. Which makes me double-back and think of our closed-off spaces, the unavailability of room for children to roam; and the current testing mania, teaching to the test, No Child Left Behind. How misguided, short-sighted, unsupportable it all is.

And the emphasis on play further reminds me of Gabriel Josipovici's work, and I think that literature is not a trivial matter, though we treat it like it is, though at the same time we nonetheless take it too seriously, too solemnly, when we take it at all, and that the best of it so often seems to embody a sense of play. The plays within plays of Shakespeare. The playfulness of Beckett and of Kafka (both all too often seen as dour). Kafka's work, and Borges', not unlike fables in their own way, in a sense, not unlike tales told by children, without the self-importance of literariness. . .

And just the other day, Skholiast noted the passing of two philosophers, J.T. Fraser and Matthew Lipman, only the former of which I'd ever heard, which means nothing. Both seem interesting, but Lipman is most pertinent here. "Frustrated by the apparent incapacity of college students to engage in critical thinking", he, among other things, wrote a series of novels aimed at pre-teens, intended, I gather, to explore philosophical topics. I love how Skholiast ends his post: "as a teacher of school-children I can confirm what probably ought to be obvious to anyone who thinks about it: children are born to philosophize, and what's more, ask far more ambitious questions than most grad students."

And I think, not for the first time, with some despair, that all of the elements are available, are accessible, for us to be better, but we seem bound and determined not to attend to what we know. We really don't know what we're doing, do we?
Posted by Richard at 10:45 PM 5 comments:

Those enormous, awesome crowds are made up of countless individual people, with friends and family and strangers, now celebrating what a commenter at Ethan's called "the most amazingly inspirational thing I've seen in fucking ever". Yeah. Look at those faces. 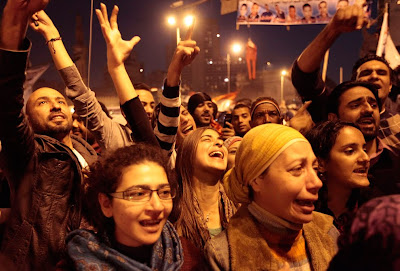 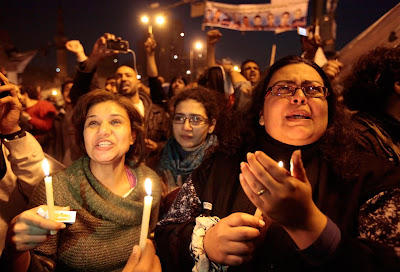 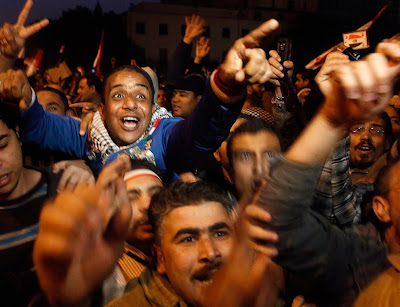 (pictures taken from here)
Posted by Richard at 7:55 PM 4 comments:

Email ThisBlogThis!Share to TwitterShare to FacebookShare to Pinterest
Labels: Egypt

Late Thoughts on Egypt and Democracy 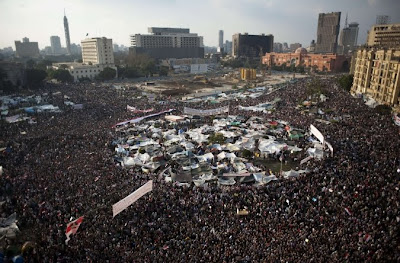 I look on the exhilarating, still unfolding events in Egypt over the last 2+ weeks with astonishment, and something like pride, with not a little hope and fear mixed in for good measure. My blog-silence over the same period is due to combination of factors, not least of which is that nothing else seems worth blogging about if I can't bring myself to blog about that. And yet what could I say? How could I keep up? (I've never been the kind of blogger who keeps up well with events, or who writes quickly.) My own tendency to want to summarize and narrate, if only to myself, to make sense of things, has been happily thwarted at nearly every turn. Almost the only thing I can do is watch and cheer and, I don't know, re-tweet stuff. (I post the above image in particular because it's an enormous gathering and it's from yesterday, more than two weeks in. Amazing. I took the picture from Al-Jazeera's site, though it also appeared at the indispensable Zunguzungu.)

I mention fear, because looming in the background, creepily, is the United States, which is not looking kindly on the prospect that its most important client state not named Israel might soon be unavailable for duty, so to speak. When will the U.S. act decisively? What kind of desperate power will it try to assert? Will the Egyptian people be able to continue to resist the "smooth transition" so much desired by ruling elites?

In a sense this fear is rooted in a tendency to think that the United States is all-powerful, that it can, and will, successfully assert its dominance. But, while the U.S. remains powerful, and is certainly unpredictable and crazy, it is nonetheless a power in decline, a decline that has been ongoing for most of my 40 years. The invasions of Iraq and Afghanistan are indications of weakness, not power, their failures still further indications of that weakness. Regardless, all fantasies about the freedom-loving and Progressive Obama aside, the U.S. is certainly trying to assert its will now. How it will play out, what kinds of deals are attempted or accomplished to continue the client relationship as against any actual desires the Egyptian people might have, still remains to be seen. In the meantime, we are treated to a remarkable series of lessons in democratic action.

Naturally, we have also been treated to standard-issue Western ruling class and intellectual rhetoric about how Egyptians are not ready for or capable of democracy. As if they were incapable of making important decisions or using political judgment. Of course, it's true that this is in part blowing smoke, a distraction meant to ease that desired transition to a favored successor inclined to maintain the status quo. On the other hand, it is typically assumed by such elites, not to mention many policy-wonk liberals, that ordinary people in general cannot be trusted with politics (in any event, they cannot be trusted to do what elites would have them do, which amounts to the same thing). The contempt for democracy, and by extension for people, is never far from the surface.

Luckily for me, since there's not much, if anything, of value I can say about actual events in Egypt, this gives me the opportunity to do what I do best: quote from a book apparently unrelated to the question at hand. It happens that I am currently reading Ellen Meiksins Wood's Citizens to Lords: A Social History of Western Political Thought From Antiquity to the Middle Ages. I'm halfway through, and it's fascinating reading. What Wood seeks to do is to situate the political thought of such figures as Plato and Aristotle in the social and political conditions of their times, to find the problems they were trying to solve, the questions that necessitated their answers. Plato and Aristotle were, of course, of the aristocracy, and on balance hostile towards the democracy, though their work was informed by it. As such, they, Plato in particular, originate the Western elite posture towards democracy and ordinary people. His opponent, usually implicit, is the sophist Protagoras. Here is Wood:

Epistemological and moral relativism, as Protagoras formulates it, has, and is intended to have, democratic implications. Plato responds to this political challenge by opposing Protagoras's relativism with a new kind of universalism. In the democracy, in the atmosphere of public deliberation and debate, there could be no ruling ideas, no individual or social group whose unchallenged dominance allowed it to claim universality for its own values and impose them on others. The only effective way of challenging the conventional wisdom of shoemakers and blacksmiths, and their ability to participate in public speech and deliberation, was to trump conventional wisdom altogether with some higher form of knowledge, a knowledge not of mundane empirical realities but of absolute and universal truths.

Platonic universalism is of a very special kind, and it is perhaps only in relation to this philosophical universalism that Protagoras's ideas can be called morally relativist at all. He certainly did reject the notion that there are higher moral truths accessible only to philosophic knowledge, but he put in its place what might be called a practical universalism, rooted in a conception of human nature and the conditions of human well-being. His argument presupposes a conviction not only that men are in general capable of making political judgments, and that their well-being depends on participation in a civic order, but also that they are entitled to the benefits of civic life. It is true that, in his view, the specific requirements of well-being will vary in the infinite diversity of the human condition in different places and times, and social values will vary accordingly. But the underlying human substratum remains the same, and the well-being of humanity does provide a kind of universal moral standard by which to judge social and political arrangements or to assess the relative value of opposing opinions, not on the grounds that some are truer than others but that they are better . . .

Both Protagoras and Plato . . . place the cultural values of techné, the practical arts of the labouring citizen, at the heart of their political arguments, though to antithetical purposes. Much of what follows in the whole tradition of Western philosophy proceeds from this starting point. It is not only Western political philosophy that owes its origins to this conflict over the political role of shoemakers and smiths. For Plato the division between those who rule and those who labour, between those who work with their minds and those who work with their bodies, between those who rule and are fed and those who produce food and are ruled, is not simply the basic principle of politics. The division of labour between rulers and producers, which is the essence of justice in the Republic, is also the essence of Plato's theory of knowledge. The radical and hierarchical opposition between the sensible and the intelligible worlds, and between their corresponding forms of cognition, is grounded by Plato in an analogy with the social division of labour which excludes the producer from politics.

I have previously sought to define democracy as a situation in which ordinary people have non-trivial say in decisions affecting their everyday lives. I like Protagoras's idea, as glossed by Wood, that "men are in general capable of making political judgments, and that their well-being depends on participation in a civic order, but also that they are entitled to the benefits of civic life". It's not just that we can make such decisions, that we are capable of making such judgments, but that, in fact, we must. Our well-being depends on it, and we are entitled to it. And so we watch an unlikely revolution unfold in Egypt, with hope and longing, as if, perhaps, it were our own. . .
Posted by Richard at 11:00 PM 5 comments: