Aimée has alerted me to a hilarious political blog: BoRev.net, dispatches from the Bolivarian Revolution. The posts are generally short, often sarcastically funny exposures of various lies and manipulations from U.S. politicians and American media about the oh so alarming left-wing movements in Latin America. Naturally it's been around for some time, unknown by me. I'll be checking them out. But the real purpose of this announcement is that I need to post this picture of their entry in the Washington Post's Easter Peeps Diorama Contest: 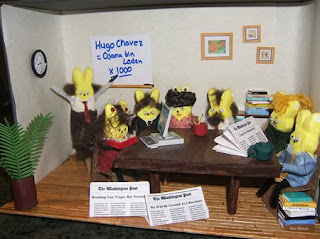