Notes on The World Is Round by Gertrude Stein 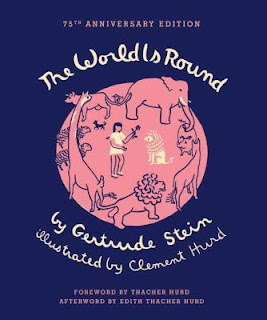 The World Is Round is a children's book written by Gertrude Stein, published in 1938. The book was illustrated by Clement Hurd, who is best known as the illustrator for Margaret Wise Brown's children's classics The Runaway Bunny (1942) and, especially, Goodnight Moon (1947).

I've lately decided I am firmly pro-Gertrude Stein, but to date this is still just the third book I've read by her. I only recently learned of its existence, via Ethan's posts about it, and even then, I wasn't expecting to read it any time soon, except I came across the attractive 75th anniversary edition on display at the Children's Book Store here in Baltimore. This edition includes the original book - with its pink pages and blue text, as mandated by Stein - an afterword by Clement Hurd's wife, Edith Thacher Hurd (from 1986), and a new foreword by Thacher Hurd, their son (and incidentally a writer of children's books himself, including one of our old favorites, Art Dog). These two pieces, especially the afterword, tell the interesting story about the genesis of Stein's book and its production, in the context of the burgeoning and 'experimental' world of children's books in the 1920s and 1930s, including some letters between Stein and Hurd. Briefly, Margaret Wise Brown, a big admirer of Stein's, suggested to Young Scott Books that they invite literary authors to write children's books. Hemingway, Steinbeck, and Stein were asked; only Stein responded.

But never mind all that! How is the book? In many ways it makes perfect sense that Gertrude Stein wrote a children's book. Her vocabulary and her syntax tend to be simple. There's rhythm and repetition, like you'd find in many children's books. 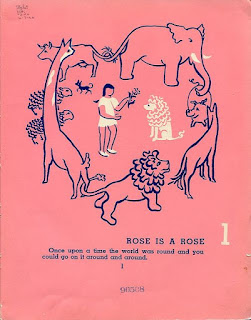 [In my effort to include pictures from the book in this post - an Existence Machine first!! - I struggled mightily with formatting. I had wanted, e.g., pages 1 and 25 to be side-by-side, but it wasn't happening. So then I thought, well, ideally, I'd write something alongside each image, preferably something relevant and insightful or at least useful. Alas, no. At one point, I came back to this post, as it remained in draft status - where it remained for many months before being published, if we're honest, and we're nothing if not that - I stared at the blank space next to the page, and nothing was coming... I typed "what am I doing" - because honestly my god what am I doing.] [Incidental side note while we still have white space to fill: this book is one of the many places, but not the first, where the line "A Rose is a Rose is a Rose" appears.] [But anyway look at page 1! Isn't it lovely?] 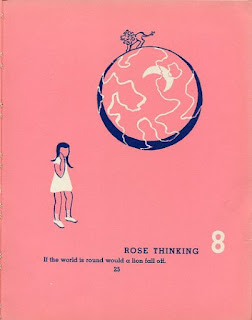 It is in many ways delightful - in both classic children's book ways and Gertrude Stein ways. But I have to say: it's difficult to imagine many actual children reading the book or sitting still while it's read to them. The book concerns the adventures of Rose, and what she thinks and feels, her doubts and struggles, and among other things, her climb up a mountain with a chair, because why not. The language is simple, as one might expect from either Stein or a children's book. And it's repetitive in the way children's books often are, but especially the way Stein often is. [I know, I already more or less said that above. Pretend this is me being artfully repetitive like Gertrude Stein. Only pretend I'm using far fewer syllables.] Yet there is a lot of text, quite a lot for a children's picture book. Many pages are only text, and a lot of it, and one page in particular is essentially one paragraph, a wall of text. So you'd have to imagine either an especially precocious child, and/or an especially patient one. Still, it is frequently lovely, often funny, interesting, philosophical, occasionally bizarre, occasionally boring, and, again, it has a page that is a wall of text, much like you'd find in, like, The Making of Americans, or Kafka or Bernhard or something, not so much Goodnight, Moon. I love that page so much. Unfortunately, while many images from the book exist online, I could not find that one, so I took a photo of it myself. And here it is: 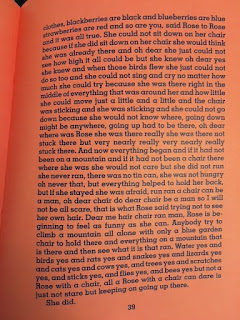